Another day in the NICU

Calvin is still doing very good. I am sitting here behind closed curtains, pumping and waiting for the NICU doctor to come in from rounds. I am curious what he will say. I do not have any blood results today. Cal's white blood cell count was down yesterday from a previous test (a good thing), his bilirubin was up from 7 to 10 and I'm suspecting it will be up more today. I will follow up with a post if something significant comes up with with doctor. Cal's O2 is still good and he's doing about the same as yesterday. The feedings continue to be the struggle. It is a combination of sleepiness and poor sucking abilities. I'm hoping to get a consult with speech and I also want to get him to my dentist who can possibly help. (curious? check out this link: http://www.healthcentereddentistry.com/ there is a neat video under the left tab "Lives We've Touched", Video Testimonials, John Garrick)
-------------
Okay, I was just interrupted by the doctor. I learned something about Cal's heart, he has a balanced heart defect (which I had known but not understood). That means the pressure in his lungs is the same as the heart. This could change in the next month to where the pressure becomes greater in the lungs and slows the heart down. I pray it does not. The doctor said Cal is doing better than expected. His feedings increased from 41% to 61% and he said he suspects his stay will be short: days instead of weeks!! He said again that at this point it is the feedings that will keep him here because the other issues will be monitored by his cardiologist. "Hospitals are for sick people" he said, "not Cal".
I feel positive right now. Oh, I asked about the bilirubin. It was not tested today, it will tomorrow. The doctor said he does not think Calvin with need phototherapy because he is getting the fluids he needs and having a good amount of dirty diapers.
Monday: Chrissy came and hung out with us. It was nice to be with her and also to have company. Grandma Jo Jo visited for a while and sang to Calvin (she claims this put him to sleep!). And, Joe suprised us by taking half a day off. He is at work today all day. I told him I'd rather he that he not take a bunch of time off right now and save it for when we're home. I think he's taking most of tomorrow off though because we are meeting with Integrative Medicine here. 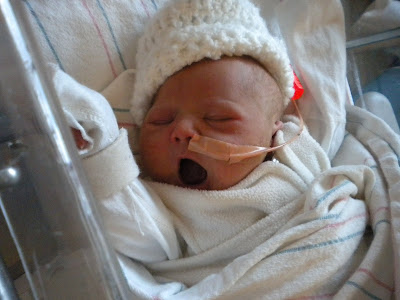 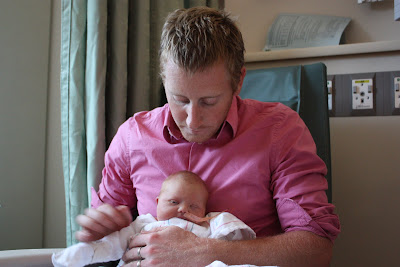 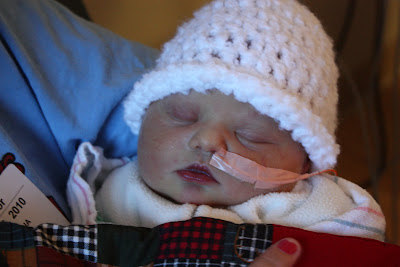 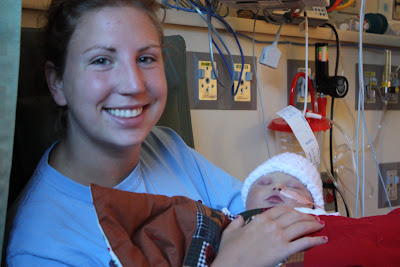