Okay, it's not really manic, but that sounds better than this! Things are not improving around here for little Calvin. The SLP came in and said not to give any more bottles until after the swallow study, which will not happen until tomorrow morning now. It's a tad bit frustrating because it keeps getting pushed back. It is set up for 8:30 am, so I know it will happen. Calvin's chest x-ray from this morning shows fluid in the lungs so he started the blood-pressure med. He had his first dose 30 minutes ago. The attending dr said it could take up to a week to "work". Cal will have another ECG to make sure the PDA (Patent Ductus Arteriosus) has closed. That is open with all babies so it's not an issue unless it has not closed yet. I think they want to see that things have not gotten worse. After that, the cardiologist will be in with results and we'll talk some more. Poor Calvin. It really hit me this morning how hard the heart defects are on him.

On a more positive, and entertaining note, here are some pictures from last nights' adventures in the garden. Joe's giant pumpkins are doing awesome and the garden looks great. He does such a good job. The boys love it out there and eat lots of veggies because of it. Nolan enjoyed the footlong cucumber. I'd wished I had the camera when I looked over and it was hanging out of his mouth as his hands worked at something else. He does that a lot; uses his mouth as an extra hand! So fun. I can't wait to introduce Calvin to the garden! 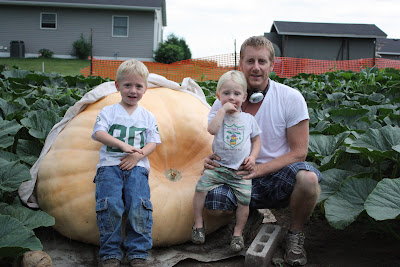 Evan's good at posing for the camera!! 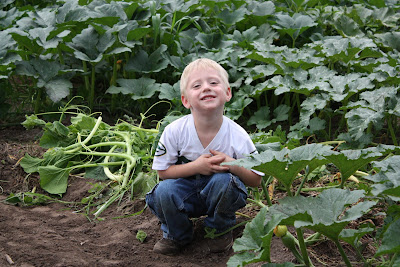 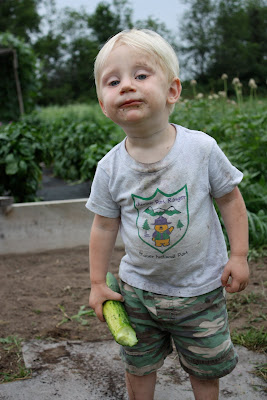 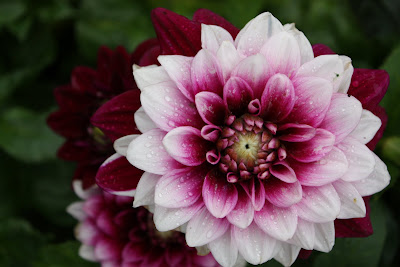