I've been writing this post in my head for 8 weeks now. I knew I'd have to reflect and share my inner thoughts and feelings about something I spend a good amount of time doing; running. I ran through 3 pregnancies, against challenging weather, over tough courses, with colds, in spectacular places, and amongst wonderful people. I would have never thought I'd accomplish such things. See, I grew up with asthma. It plain old hurt to exercise. I'd need an inhaler with me and it was just not the same feeling once it kicked in. I did the required runs in school. I thought those were such a huge deal and I dreaded it. It wasn't until later high school and college that I started exercising and using running to do so.
My memories of beginning to run were with my cousin Cami. We ran to train for high school volleyball. She and I had many times of running together. Often we would get up at 5 and run a mile or 2. I admit, it was miserable. I was always so tired. But, once I got up and going, I'd feel great! Plus, it was easier to have a partner to suffer with me! I have had many partners to run with. The main one is my husband.
Joe encouraged me to run, and run in the morning, back during my freshman year of college in River Falls. He'd tell me that running in the morning was better because you were using up your stored energy, not the food you ate just hours before. That has helped me find my favorite time of day to run, the morning! Well, I'm getting off track and would need a book to write all my running thoughts and memories.
I ran many miles in River Falls. My favorites were with Cami, Joe, Mandy, and Lisa. In the evenings after coming home from our summer jobs, Joe and I would run to a destined spot (a park or playing field) with a frisbee in hand. He would encourage me to be the runner I am today.
Mandy and Lisa were great running partners (and rollerblade partners as well - I'll never forget that first time Lisa! "I don't know how to use my breaks!"). Both better than I, though they'd never admit it! Most of my partners are better than me but I guess that gives me something to keep up with (like this morning with AJ). I also ran some miles with my high school friend, Krissy. This brings me to thoughts of where I've ran.
I ran in Madison with Krissy, New Jersey with Lisa, and in some 5K's with Mandy. I've ran along oceans, rivers, lakes, and mountains. Sounds spectacular, now that I've finally taken time to reflect upon this.
I've ran in Cancun and Cabos, Mexico; San Diego and San Clemente, CA; Newark, NJ; Yellowstone and Glacier National Park; Red Lodge, MT; Columbia, Maryland; and various places around home. There are more places and people than I have time, space, or energy to mention. That does not mean they were not important though (like the marathon - training with Jen, the bear, running clubs, etc).
They are all memorable. Some of my regular weekly runs have been the most...like when I first ran after finding out I was pregnant with Evan.
I took the pregnancy test right before I was going out for a run. I still ran, but with butterflies in my stomach! I ran until 2 days before I had him. I ran the day before I had Nolan, and the day I had Calvin. Each child was easier to run with. I think it was because I knew I could do it. I loved sharing that time with the boys and was/am hopeful it helps with the quality of their lives.
It has helped me in my life. I am more confident and fulfilled, not to mention healthier. I could not believe how much running has provided me as I began to think about the various runs I've had (and I don't mean those kind of runs!) I will have to stop this post because it is getting long, but maybe I'll be coming back to this topic. Okay, you can count on it.
I said I'd find some pictures, but there are not many. I wish I had a picture from all those places and with all the people I have run with.
This one is from my first and only OVERALL 1st place winner - in the Woodville, WI 5K. The year was 2007. I was the first female in. I was in so much pain. Joe was running the half-marathon as part of training for his first marathon. My time was about 23:03 or something close. What is kind of neat is this run is the home of my first 5K I ever completed (in 2003, I think). 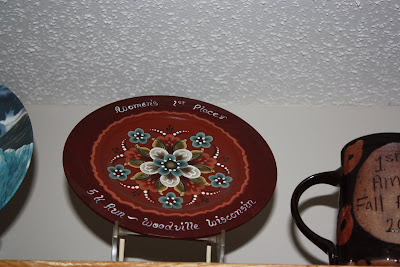 The next few pictures are of my first and only marathon, Grandma's in Duluth, MN. It was hot and sunny. I was nursing Nolan as he was only 4 months old when I signed up and 10 months when I competed in it. My goal was to have 10 minute miles or a 4:20 time. I came in at 3:57:30 (or so on the seconds). This made my average mile about 9:04 minute miles. I like the difference between this first picture and the last. The last truly reflects how I felt and when I saw it, I laughed and laughed and wanted to frame it. Katie and I got quite the kick out of these. 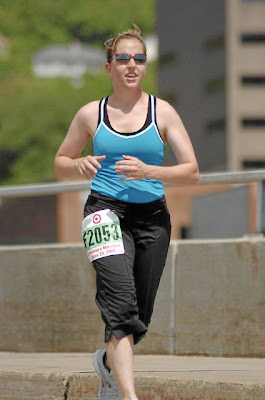 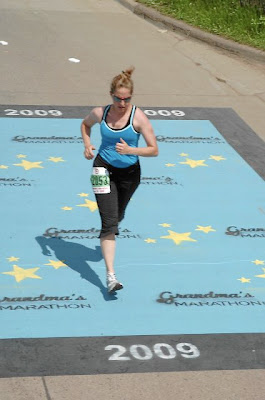 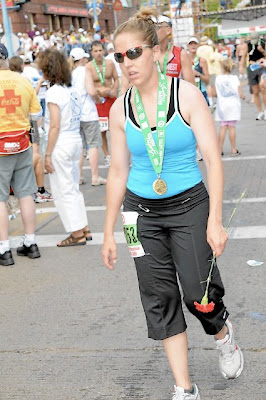 Unfortunately, I did not have space to include much on Joe's running. He has been at it a long time. I think he'd agree that this picture is one of his favorites because he got first place while pushing Evan in the cart. The guy behind him was probably pretty disappointed that an 'old' dad beat him while pushing a load. This was in the 2008 Amery Fall Festival 5K run. I was at home with baby Nolan. I remember Joe saying he did not expect a good run because he was up helping me with Nolan (he was only a couple of weeks old). Well, I think Joe should do that more often! 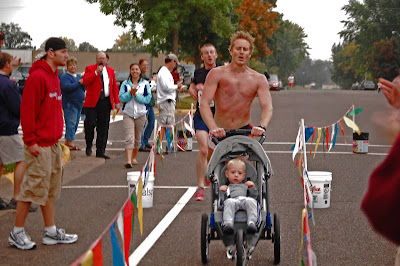 The final picture for this post is of the New Richmond 5K while I was 35 weeks pregnant with Calvin. According to the running club newsletter, I won the 8 month pregnancy category! 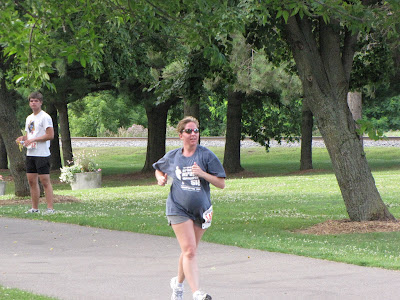