Joe and I arrived at about 10am on Tuesday. I slept pretty poorly the night before. I really did not have much anxiety Sunday night, but made up for that Monday night. It is just hard to walk by Calvin's room and have it vacant and know he is over an hour away. Plus, I really do not want to miss anything or not be there for him. Yeah, I know, he's fine! But, I would not be doing my job if I didn't want to be with him as much as possible.
That said, I will be bringing stuff to stay tonight (Wednesday). I am thinking it will be another big day. Yesterday was HUGE! When we walked in, Joe noticed the chest tubes were out. Calvin was also starting to come to because he was having his breathing tube removed. In order to do so, he had to start waking up but then we had to help hold his head still so that his movements would not cause more damage to his throat. It was then that I felt he was a tad bit warm. He cooled off by the end of the night though.
Calvin never fully relaxed when I was there. He is definately on pain meds, so it was different than seeming like he was in pain. I felt bad that I could not hold him more.
His catheter was removed in the afternoon as well, so he's down to blow-by oxygen with a nasal candula and a line in each arm; one to a vein, one to an artery, and the line in his neck. I did finally get to hold Calvin at about 5:30 when I tried getting him to take a bottle. He relaxed just a tad bit more but did not seem very interested in the bottle (sugar water). He was just too loopy still. You can tell his airway is/was not the same either with his hoarse cry.
Well, he is doing very well and I am anxious to see what tomorrow brings. I trust God's plan and remind myself of this passage that a friend sent me a few days ago:
"Do not fret or have any anxiety about anything, but in every circumstance and in everything, by prayer and petition (definite requests), with thanksgiving, continue to make your wants known to God. And God's peace (shall be yours,that tranquil state of the soul) which transcends all understanding shall garrison and mount guard over your hearts and minds in Christ Jesus." Phillippians 4:6,7 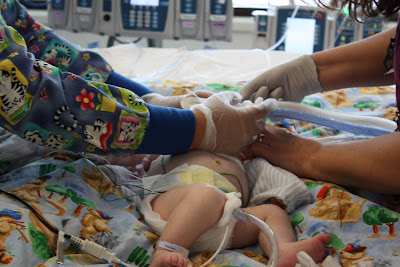 taking out the breathing tube 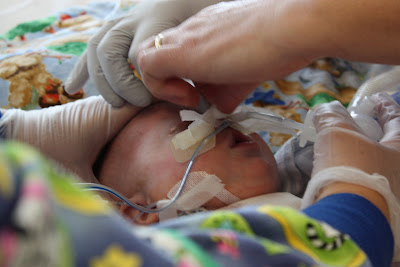 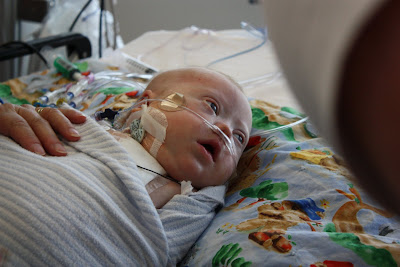 he looks alert, but it's a bit deceiving 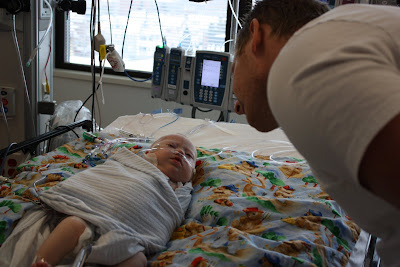 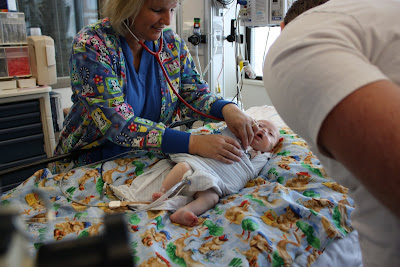 some of the monitors 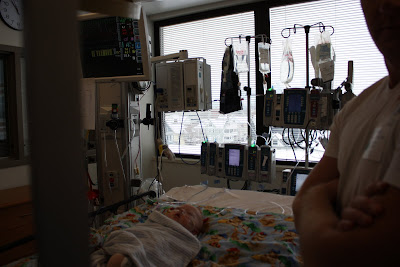