Baby It's Warm Outside

Wow is this weather great or what? 60 today, and lots of sun to boot.
I'm pretty sure the boys were the crabbiest they've been in a while when it was their bedtime last night. Yeah, the time change is big, their decisions to not nap is huge (hey, I attempted), and lots of outside time is grande! Joe and I tried our darnedest (I didn't know that was an actual word until spell-check left me alone) to "smile and wave" when we were either holding Nolan down for his diaper and tooth-brushing or listening to Evan cry about, well, I can't actually remember why but he had many melt-downs yesterday (another story), or Nolan cry (for 15 minutes straight)because he wanted to take a bath, not a shower. Yes, when we are short on time as we were last night, the boys usually take a shower with their dad and I can stand there with a towel acting like a goalie, a receiver, or a combo of both. Well, maybe I'll be able to sleep in a bit this morning. That is a big MAYBE, because the littlest dude is pretty well tuned to the clock and is getting up at the old times. Life is great isn't it? I mean it, I really do enjoy being a mom, it's my favorite role next to being a wife. Both come with a lot of work and sometimes people get to hear me vent about them, but I wouldn't trade either for any. 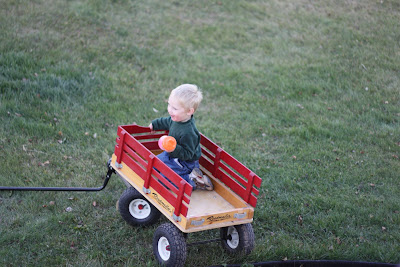 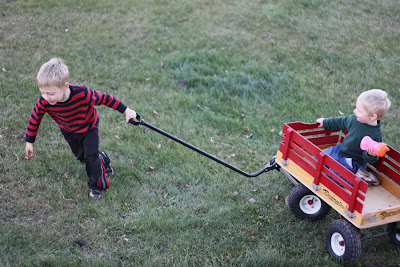 Right after I took this picture I yelled to Evan to put his socks and shoes back on. I didn't even bother with coats or hats because those come flying off them even when it's only 40 out. I choose to not put energy into some of those things, but it was not that warm out and I didn't want monkey to do what monkey saw. (monkey is in the wagon in case you're confused) 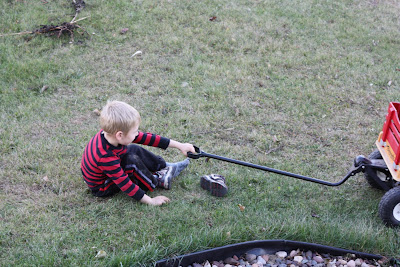