They make it so easy!

My kids make is so easy to love them. Of course a good nap (for them and me) helps! Nolan has been very crabby for a couple of weeks. He was testing us to see how long he could stay up at night. We had to place him back in his bed numerous times, as late as 10pm! Once the lights would go out, he would stay put. THEN, he would not necessarily nap. This charade naturally zapped me of energy. Thank you winter! I am blaming the weather and depleted outside time.
It was my dad's birthday yesterday. I also had an appointment in the morning. So, Nolan was with Grandpa Ray twice and both times they went outside sledding and hauling wood to the burner. He napped so well and is still sleeping (it's 7:30am).
Then there's Evan. Evan is a very intelligent and sweet boy. Of course he acts like a preschool boy and big brother (fights, whines, and other things he'd rather I not share), but he can be so loving. He loves animals (I'm sure I've said that before). He likes to build jungles. He asked me, "do you want to decorate my jungle?" I got to put all the animals in amongst the trees and water. Then he told me that I do a good job decorating jungles. He is a natural caretaker and encourager. He told me yesterday that our baby is the sweetest.
Then there's Calvin. I completely agree with Evan. He is soooo sweet. If anyone wanted a cute, cuddly, easy going baby, he's it. I find myself thinking of the past 5 months and I cannot believe how much has happened and how attached I've become. He smiles so much more, loves to talk to people (coo's of course!), and is so patient. He makes it easy to have Nolan around, is what I laugh about quite a bit! Oh Nolan. I'm telling you, I have quite the trio. I feel so blessed. (I could add Joe into that, too!)
This is what my computer time usually looks like (I used the photo booth and Nolan loved showing off). 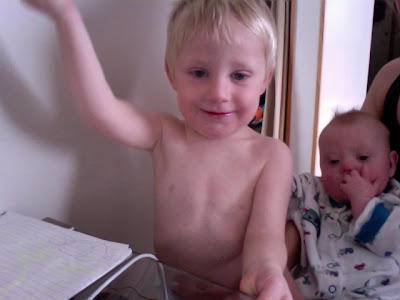 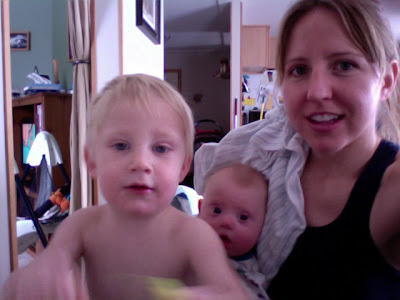 Evan had his Sunday School Christmas program. He gets pretty shy about going and usually takes an animal. He insisted he bring his huge dinosaur and I told him he couldn't have it out for the program. Hmmm...he's in the white button shirt: 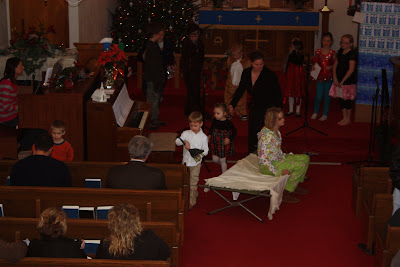 He left the dinosaur for his part in the program, a train car: 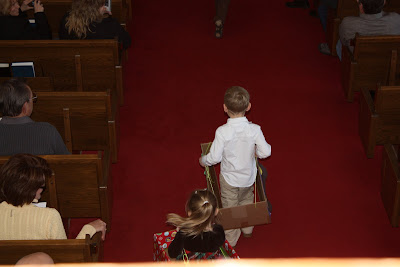 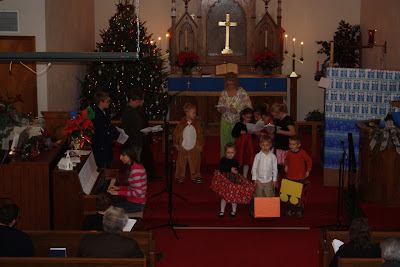 We sat up in the balcony so Nolan could move about freely and not cause a distraction. He did very well and yelled "again" when the songs ended. 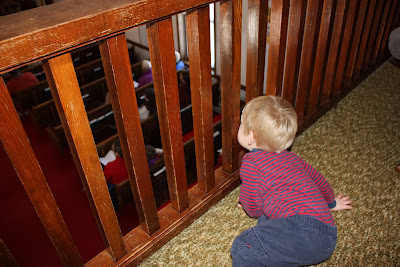 I was downstairs and came up because Nolan was laughing and laughing! When I peeked around the corner I saw him pushing Calvin in the swing and Calvin had a huge smile on his face. I ran to get the camera but that only distracted them both. Darn it! I cannot seem to get many pics of Calvin's smile. I guess we have something to look forward to then! 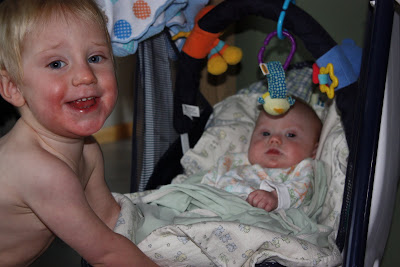 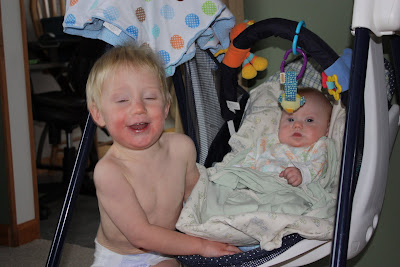 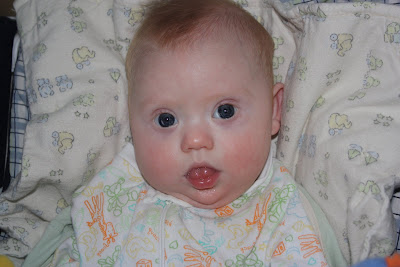 These are his dad's glasses. They are so dorky! Aunt Doop gave them to Joe when we went to California quite a few years ago. I do think they look cute on Nolan though! He's been walking around with them for days... 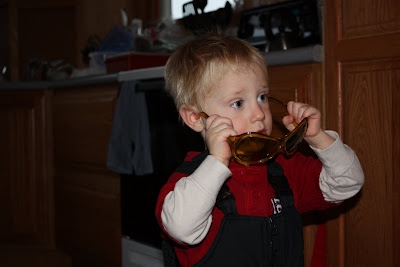 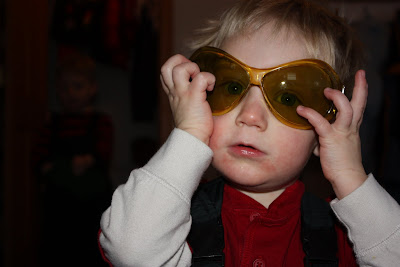 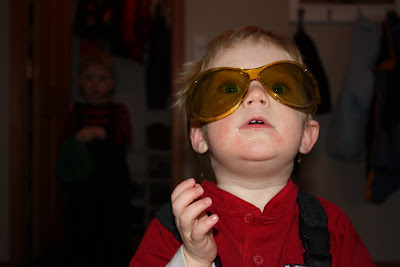