10 years ago I married this man. 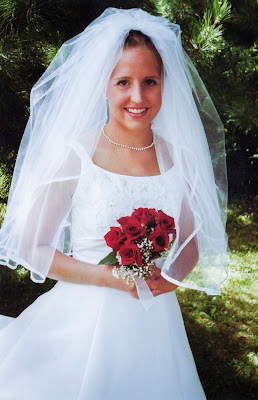 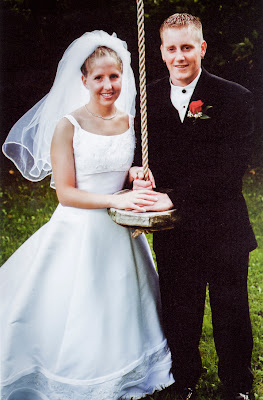 It is hard to believe, then I think about everything we've been through and 10 years does not feel long enough.

I said I was going to share a story, or rather analogy or our cherry blossom tree.  We received our tree on our wedding day from my now sister-in-law, Candy.  (At the time Candy was not with my brother, but this was the night they developed eyes for each other! )

Joe and I were building our home, so a tree was a thoughtful and exciting gift.  We planted it out front, with a vision of what it would look like in the future.

Our tree was doing very well.  It would blossom faithfully every spring, like other trees of its kind.  It was small to begin with, so it was not as impressive as other, well-established trees.

It has grown.  But it nearly became compost.  We began having droughts year after year.  Then we had Evan and when he was a couple years old he was rough on our tree.  He was playing, but would hang on it, put toys in it, etc.

Then we noticed bug/worm webs and it seemed too late.  There were not many leaves left and it did not look promising.  2 or 3 years ago I thought we were going to have to cut it down.

But it was not ready.  It fought and remains standing.  The trunk is not necessarily pretty.  But that is its stability.  The structure by which it is supported, with one end holding the roots and the other end displaying its leaves and fruit.

Our marriage is in many ways like our beloved tree.  We have been in places where we had bugs threatening to destroy us.  But we held strong in the trust of our trunk.  It may show the struggles we've been through, but at each end is life.  We continue to grow out our roots and enjoy the fruit of our labors.