Today is the greatest...

...day I've ever known.  I know I've said that before.  But I'll say it again.  Actually I've sang that many times before:  Smashing Pumpkins!

It was a regular day full of wow, scolding, humility, frustration, exploration, work, etc etc.  It was just plain old busy.  The days that were familiar to me a couple years ago.

This set up is very similar to 2 years ago!  However, I am definitely less stressed out without worrying about my baby and spending time at the pump or nursing.  But, I am finding a lot the day time to be busy as it was then.

I've also said this before: Being home is more work than actually going out of the home to work.  It is non-stop.  The difference? I am less stressed because I am getting this work here done, whereas before it was piling up and stressing me out!

The past week I worked like a mad-woman to get the house in more order.  Joe and I threw around the idea of re-arranging the rooms and getting the office moved upstairs.  Really, we just needed to re-establish an office.  Since having Evan we have not had one.  We had a nursery.  And that was fulfilling!  Now we no longer have a nursery.  I touched on this in the last post.  And, as promised, I took pictures.  I realize it is not new for some of you close readers, but for those of you who aren't, then you can see where I am. I always imagine the setting of the writers and when I see the reality (including a picture of the writer) it is usually such a shock but then I can imagine their life more.  I like that: Makes it more complete.

The new office needs repainting, but good enough for now!  Joe plays his video games in here now, so we have 'together time' at night singing and talking or whatever comes about...Not romantic by any means!!  But I do like being in the same room with him!  (call me crazy!)
Going down the stairs which faces you north - don't give me that, everyone should know their directions, there are only 4 of them: The sun comes up or we say 'rises' in the east, you know, by New York, and goes down or we say 'sets' in the west, you know, by California.  Pay attention.  Sure, there are 2 other directions...South produces sun throughout the day.  When you face north you have the sun behind you.  Go around your house mid-day, what side has shade?  Okay, there is sarcasm in there, but seriously, after making yourself learn it you will have it down: "Never Eat Shredded Wheat"... - take a right turn and you see this: our living area down stairs.  Yes, we could use wall art above the sofa.  I'm on it.
Did you see the toys behind the couches?  This is the play room area.  We are now facing south.  That door is to the furnace room.
But, if you take a left when entering the toy room you will come to the big boys' old room, now Cal's room:  This window faces east, which will not be ideal next summer...since, you know, the sun RISES in the east...okay, I just know a lot of people don't know their directions and I'm on a campaign to change that.
Those items in the window are Cal's special ones.  The clown was given to him right before his OHS by a local church.  Pooh Bear is from my friend and former boss, Nancy.  The bunny?  Hmm, I cannot remember but probably Grandma JoJo, and the elephants:
That cute one was from me when we went to San Diego in March/April of 2010.  It was for my baby whom I didn't know and thought maybe was a girl.  I got an elephant from my cousin Angel when I was a baby.  I gave it to her oldest daughter Hailee.  I'm guessing she no longer has it, but I chose this toy based on that memory.  The prayer Calvin and I received from his Great-Grandma Jan (Joe's maternal grandmother) when I was pregnant with Calvin.  It means a lot to me.  That white, blurry kitty was from Grandma JoJo when Calvin was in the hospital last year.  I think I remembered all of that correctly!
The mural was painted by my friend AJ.  She is an elementary art teacher in Somerset.  A very talented artist and loves painting murals.  She did this before Nolan was born.  It is so nice!  Calvin loves the tractor, too.
The dino poster needs to come down and put up in the other room.  Evan got it from the MN Science Museum last year, from his dad.  The big tiger is from a neighbor, Alex.  She got it for Calvin, it is his Hobbes!  Scout in the corner of the crib says "Good night, Calvin" and sings his name and other stuff.  It was a gift for Calvin from his aunt and uncle Rae Ann and Chris.

The following photo shows the giant pumpkin in the garden.  If only the real thing were that weed free in the summer! 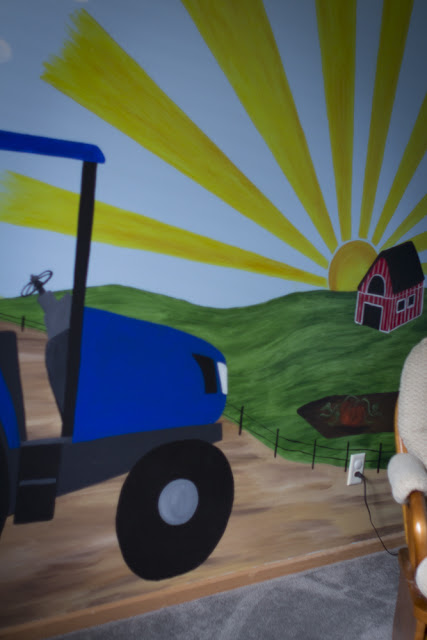 My rocking chair!  I purchased that right after Evan was born.  There are months worth of time I spent in it nursing the boys.  Tonight as I rocked Calvin I thought about the fact that one day I will no longer feel the weight and warmth I cherish when I sit there.  Sadness!
Okay, the new room!  This used to have the bed to the north (which is our right), the couch and desk from the first photo, and a bunch of other useless stuff.  It was the catch all room.  It is much better now!
My first quilt.  I made it for Evan after I had Nolan.  I want to make Nolan one this next year.  Probably something with cowboys or trucks...or both and then some!

Evan loves pillow pals!
Speaking of Evan, he lost his first tooth today!  He got a new molar a few weeks ago, so he still has the same number of teeth!  This is a first for me, too!  Love being a mom! 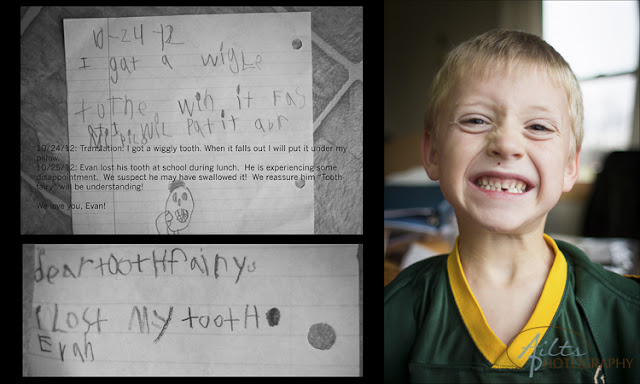 More next time!  Lots of photos and another supplement post are very soon to come...
Posted by Ilisa Ailts at 9:09 PM